Ann Morgan Hart, better known as Nancy or Aunt Nancy, had a personality that matched her six-foot, muscular frame and red hair. It was said she was hot-tempered and that she, not her husband, ran the family. Some Cherokee neighbors named her “Wahatche,” usually translated as “war woman.” When the Revolutionary War reached Georgia she proved she deserved that nickname. 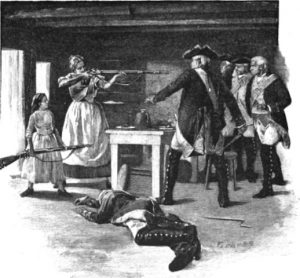 Born in Pennsylvania or North Carolina around 1735, she was in her thirties before she married. Likely her smallpox-ravaged face and crossed eyes (and possibly her temper) turned away potential suitors, but not Benjamin Hart, a prominent North Carolinian (born in Virginia) whose family tree reportedly branches out to include Henry Clay and Thomas Benton Hart. It has been claimed Nancy herself was a cousin of Daniel Morgan and was related to Daniel Boone, though Encyclopedia Britannica says there is “no real evidence” to support that. (The New Georgia Encyclopedia and the American Battlefield Trust both acknowledge Daniel Morgan as her cousin in their articles.)

By the time American colonists declared independence from Great Britain, Benjamin, Nancy and their two daughters and six sons were living in the frontier of the Broad River valley in Georgia. Her husband joined the Georgia militia on the Patriot (American colonists) side and was frequently away from home, but Nancy feared neither men nor wild beasts. (Yes, ladies, I know many of you consider that redundant, but we’ll leave that discussion for another day.)

Despite her crossed eyes Nancy had a reputation as a crack shot who didn’t need a husband to put wild game on the dinner table. Some accounts say she may have taken part in the Battle of Kettle Creek, where a group of outnumbered Patriots surprised and defeated 800 Tories on Valentine’s Day, 1779. Most sources agree that she sometimes disguised herself as a crazy man (her height and scarred face helped that deception) and wandered into British camps to gather information.

She likely wasn’t quiet about where her sympathies lay; something led a Tory spy to come a-creeping up on her cabin. One of the children noticed an eyeball peering through a hole in the chinking. Nancy scooped a ladle of boiling, soapy water from where she was making lye soap. She threw it into the hole and was gratified to hear screams from outside. The spy was bound and turned over to the Patriots.

The incident that put Nancy Hart into the realm of legend occurred when five or six soldiers—some accounts say British, others say Tory, which is more likely—showed up in pursuit of a Whig (Patriot) leader. They insisted she feed them. Some accounts say she claimed she didn’t have enough food, a problem the soldiers solved by shooting her turkey. Other versions say she showed exceptional hospitality, plying the men with food and alcohol. Either way, copious amounts of alcohol figure into the story.

She sent her 12-year-old daughter, Sukey, to fetch water, quietly instructing her to blow into a conch shell kept near the spring. Conch shells were commonly used as frontier disaster signals to summon help from neighbors and alert family members working in the fields. One ponders why they heard the signal but the soldiers didn’t, but if Nancy’s unwelcome guests were guzzling the high-octane whiskey of the frontier they may have been, shall we say, a bit distracted.

Certainly, according to the legend, they were too distracted to notice Nancy surreptitiously removing some of the muskets they’d stacked in a corner. She managed to slip two to Sukey through a gap in the wall (some say it was a hole in the chinking, but that would have been a pretty big hole to let the butts pass through) before the soldiers noticed and jumped up to stop her. She grabbed another musket and warned she’d kill anyone who tried to take it from her. One soldier tried; that soldier died.

Nancy grabbed another shootin’ iron and renewed her threat. Her crossed eyes made it difficult for the soldiers to determine whom she was aiming at, according to Women and The American Revolution, by Mollie Somerville (The National Society of the Daughters of the American Revolution, 1974). Still, one started toward her and fell wounded.

Benjamin Hart arrived with help. Debate ensued over whether to shoot or hang their prisoners. Several accounts say Nancy opted for hanging, saying shooting was too good for them, according to Somerville. Who was going to argue with her? The unfortunate soldiers died dangling from tree limbs.

An account of this incident first appeared in print in an 1825 newspaper during a visit of the Marquis de Lafayette to America, and was retold in Elizabeth F. Elliot’s The Women of the American Revolution, Vol. II (Baker and Scribner, 1848). Several points raise questions, such as why the soldiers didn’t hear the conch shell signal. Some accounts say Sukey was sent to get Benjamin while the indomitable Nancy held the last three or four soldiers at bay. If she had already slipped two muskets outside to Sukey, that would have left at most two unfired after killing one man and wounding another. Perhaps her captives feared charging her, no one wanting to be the one who took the bullet. Other accounts indicate Benjamin and others arrived soon after the second soldier was shot.

Stories this good have a way of taking on a life of their own, and perhaps some details got muddied. But there is one piece of physical evidence that supports the legend. In 1912 railroad workers unearthed six skeletons near where the Hart cabin had stood. (It was washed away in a flood; the Daughters of the American Revolution built a replica, using stones from the original chimney.) The skeletons were under nearly three feet of soil and were estimated to have lain there for a century or more.

At the beginning of the Civil War, a group of Georgia women near LaGrange formed their own armed militia group for home defense and named it after Nancy. Georgia named Hart County and its seat, Hartwell, in her honor, along with the Nancy Hart Highway (Georgia Route 77) and Lake Hartwell. She was inducted into Georgia Women of Achievement in 1997.

Nancy Hart died near Henderson, Kentucky, in 1830, a few years shy of her 100th birthday. For those who may be wondering, I’ve not found any connection between her husband’s family and the Confederate guerrilla/spy Nancy Hart from the Eastern Panhandle of West Virginia.