Most people who aspire to be (sound of trumpets, please) A WRITER!!!! dream of seeing their name on fiction, poetry, stage plays and/or movie or TV scripts. Seeing it on nonfiction? Not so much. Certainly nonfiction wasn’t what I focused on when I daydreamed in English class about my future. But life frequently fails to make that left turn at Albuquerque, and we end up somewhere other than where we thought we were heading. Far and away the bulk of what I’ve written is nonfiction, and I’ve found I love it as much as I love writing fiction. Creating readable nonfiction requires just as much creativity but with the added challenge of “the facts, ma’am, just the facts.”

“Just when I think there’s no way you can pull another over-the-top moment from history, you pull another jackrabbit out of your hat!” 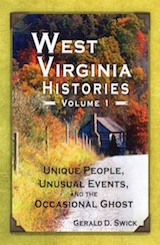 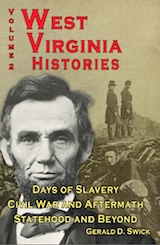 Volume 2: Days of Slavery • Civil War and Aftermath • Statehood and Beyond

Volume 3: Crime, Politics, and Other Disasters 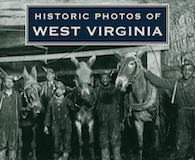 Historic Photos of West Virginia coffee-table book (Nashville: Turner Publishing, 2010) This was the first photo-history book ever published about the state. There have been specialized books on topics like the Civil War or coal mining in the state, but no others that looked at the state’s history from its birth in the Civil War to the 1970s.

His prose is colorful and informative, often going well beyond the minimum information and adding context to these fascinating images. – Goldenseal magazine

Nine entries in The Encyclopedia of World War II: A Political, Social and Military History, Spencer Tucker, Ph. D., editor (Santa Barbara, Ca.: ABC-CLIO, 2005). Should the topics of Romania, South Africa, or unarmored vehicles in WWII ever come up at a dinner party, I’m going to be the hit of the evening.
Return to top.

NEWSPAPERS
Apart from my weekly column in the Exponent Telegram I wrote the featured story for the weekly publications Marion Xtra and Taylor Xtra for two years and numerous special assignments. The biggest of these was when I was asked to identify the top 150 stories of the 20th century in a nine-county area of North Central West Virginia for the Clarksburg Exponent Telegram and WBOY-TV in 1999. I researched and wrote the 11-part series for the newspaper and scouted filming locations and served as commentator on the stories for the television portion. This unique project involved extensive research since the information was decentralized and did not exist in any easily accessible format.
Return to top.

MAGAZINES
I researched and wrote the “Commander Dossier” and “Weapon Files” departments for each issue of Armchair General magazine, September 2005–September 2007. The two departments paired a notable commander such as General William C. Westmoreland and the UH-1 Iroquois “Huey” helicopter.

Click here to read the Weapon Files on the longbow

“Ballots and Bullets: Would Lincoln or Soldiers and Sailors Win the Elections of 1864?” feature article, November 2014 America’s Civil War magazine

“His Own Place in the Sun” feature article written with Donna D. McCreary, Summer 1998 Lincoln Lore. Solved the 70-year mystery of why Robert Todd Lincoln was buried in Arlington instead of with his family in Springfield, based on a previously unknown letter by Mary Harlan Lincoln we discovered in a private collection

Thirty-two articles for The 1998 Games Annual

Twenty-nine articles for the 1997 Games Annual
Return to top.

INTERVIEWS
As a researcher, a freelance journalist, and as web editor for Weider History Group I’ve conducted dozens of interviews. These are a few of my favorites that can be read online.

Brendan Gleeson, Into the Storm

U.S. Marine Corps captain (RET) Dale Dye, who advises filmmakers to make military portrayals more realistic, on his work with HBO’s The Pacific miniseries (A few months after conducting this interview by telephone I had a chance to meet Captain Dye. I introduced myself and reminded him of our interview. He responded, “Yeah, I remember you. Your questions made me think.” I regard that as one of the highest compliments I’ve ever received; he does not suffer fools lightly.)

National Museum of the Pacific War, a photo essay (not an interview, per se, but the photos were taken during a special tour with a museum staffer)
Return to top.

BOOK REVIEWS
Backstage at the Lincoln Assassination: The Untold Story of The Actors and Stagehands at Ford’s Theatre, by Thomas A. Bogar (Regnery History, 2013)

Ghost Soldiers of Gettysburg: Searching for Spirits on America’s Most Famous Battlefield, by Patrick Burke and Jack Roth (Llewellyn Publications, 2014)

Lincoln’s Bishop: A President, A Priest and the Fate of 300 Dakota Souix Warriors, by Gustav Niebuhr (Harper One, an imprint of Harper Collins, 2010) 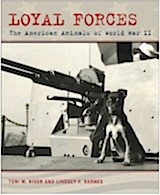 The Medal of Honor: A History of Service Above and Beyond, by the Editors of the Boston Publishing Company (Zenith Press, 2014)
Return to top.