June 6 will mark the 75th anniversary of the D-Day landings in Normandy during World War II. Among approximately 2,500 Americans and 1,900 British, Canadian and other Allied troops who gave their lives that day were 38 men from my home state of West Virginia. (A list of their names can be found on the state Archives & History site.) Reflecting on this prompted me to revisit a column I wrote for my hometown paper, the Clarksburg Exponent Telegram, on July 2, 2000. I plan to reprint this in a future book of the West Virginia Histories series but, on this 75th anniversary, to honor all those who took part in the D-Day invasion I’m reprinting the column below, with some changes to remove comments that were topical when it first appeared and to add some information I’ve come across since then. 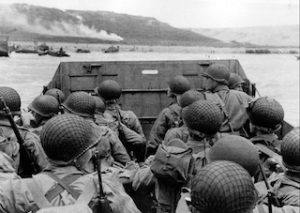 The Normandy invasion, codenamed Operation Overlord, was an incredible roll of the dice; failure would severely set back the war effort and free German troops for use on the Italian and Russian fronts. It might have led the Soviets to negotiate a separate peace with Hitler.

Overlord was the largest amphibious and airborne operation in history (the naval ops were codenamed Neptune). According to John MacDonald’s Great Battles of World War II, the Allies committed nearly 11,000 combat aircraft, 2,300 transport planes, 2,600 gliders, and over 6,000 warships. A total of 39 American, British, Canadian, Free French and Polish divisions attacked across the English Channel, by sea and by air. Plenty of West Virginians were among them. These are the stories of just a few.

Captain E.G. Ours Jr., from Parsons, never made it to France. The plane he was piloting went down in the Channel, where he was rescued after being listed as lost, according to the Exponent, June 10, 1944.

Sergeant Paul F. Milstead of Clarksburg, a paratroop rifle squad leader, jumped from a plane behind enemy lines that came in low because of antiaircraft fire. A German machine gun caught him in both legs, over 100 feet in the air. When he hit the ground, his broken right leg became a compound fracture, according to Anybody Here from West Virginia?, a collection of wartime reports from state journalist Howard L. Chernoff.

Sergeant Milstead came down 50 yards from the machine gun that had crippled him. He played possum behind a small rise until the gun moved off an hour or so later. An American glider soared three feet above him. The troops that debarked from it carried Milstead to the shelter of a hedgerow and left him with three other wounded paratroopers before moving on toward their objective.

After the glider troops departed, two companies of Germans reclaimed the area. One of their officers who spoke English stripped the wounded men of their equipment and rations. For two days they lay without food, sharing a single canteen of water. The Germans did nothing to treat their wounds, but didn’t interfere when a French civilian brought them food and milk.

American artillery started dropping shells on the position, and the Germans bugged out. For six days, French civilians fed the injured paratroops, but did nothing to treat their wounds. Milstead finally convinced one of the Frenchmen to carry a note to the artillery asking for litter bearers. Suspicious of a trap, the artillery commander sent litters, but no bearers. The French carried Milstead and his companions to safety, where they received medical treatment 10 days after being wounded.

Another account from Chernoff’s book tells of Private Thomas McGuire of Bluefield, whose landing craft was hit by a shell. He and his buddies abandoned ship and waded ashore, where they were greeted by a hail of 88mm shells throwing shrapnel in all directions.

“Willie and Joe” cartoonist Bill Mauldin called the 88 “the terror of every dogface.” He once drew a cartoon depicting a G.I. glaring at a German prisoner while an interrogator assures the angry soldier, “I’ll let ya know if I find th’ one wot invented th’ 88.” (Bill Mauldin, Up Front, Henry Holt & Co., 1945; cartoon drawn 1944)

Hedgerow snipers used the noise of artillery bursts to silently pick off cowering men without detection; to McGuire, those snipers were the worst part of the invasion. He made it 12 miles inland before a piece of shrapnel hospitalized him.

Twenty-one-year-old Pierre “Pete” Gunnoe, from Bandytown in Boone County, landed on the Dog Green sector of Omaha Beach, the most heavily fortified section of that landing beach (it is the area depicted in the opening scenes of Saving Private Ryan). Gunnoe’s unit, the 5th Army Ranger Battalion, was tasked with clearing a path through minefields and knocking out pillboxes to allow the 116th Regiment of the 29th Division to advance. The 5th Rangers ultimately fought their way up the slope and with elements of other units reached Vierville-sur-Mer four miles inland, opening the way for follow-on troops to expand the breech in the German defenses.

Of the 10-man section that included Gunnoe, five were killed or wounded on D-Day, according to an article about Gunnoe by L. E. Keeney in Coal Valley News, July 5, 2000. He suffered five wounds, including shrapnel—some of which remained in his body for the rest of his life—when the jeep taking him to the rear after his second wound struck a mine. The wounds left physical and mental scars that led him to seek psychiatric treatment after the war, but he lived until June 2000, dying in in Alabama, where he had worked for the Redstone Arsenal.

Aboard the heavy cruiser USS Tuscaloosa Seaman 3rd Class George A. Wehrle wrote in his diary about watching bombs exploding onshore during the pre-dawn hours of June 6 before his ship moved into position to shell German guns at Fort Tatihou and the Mont Coquerel battery that threatened the landings on Utah Beach.

Vincent Di Bacco of Tucker County went ashore at Omaha Beach as a medic with First Army engineers just after 10:00 on the morning of D-Day and found himself in “a scene from Hell,” according to an article by Mike Eads that appeared in the Martinsburg Journal, June 5, 1995. German fire was so heavy that “Our movement was almost entirely lateral,” taking advantage of what little protection sand dunes offered. Later he recalled wounded men on litters near the water were washed into the Channel at high tide. Enemy fire prevented moving the wounded farther ashore until shortly before midnight.

This year’s 75th anniversary will be the last “big” anniversary in which we will still have WWII veterans living among us. All the stories of D-Day will never be told. Many of them lie buried beneath simple white markers. To all those who kept the Allies’ incredible die roll in Normandy from coming up snake eyes, thank you.

Earlier this year I edited D-Day 75th Anniversary – A Millennials Guide. Despite having “Millennials” in the title, this is a book with a great deal of information about D-Day and WWII in Europe for any audience. (I get no royalties on sales, in case you’re wondering; what I did was a work for hire.) 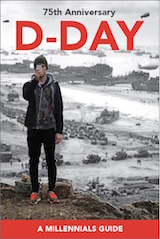 The book’s chapters cover a wide spectrum: historical pieces on events of the Normandy Campaign and other aspects of 20th century history; travel articles about England and France; stories about pets and animals; D-Day in pop culture (Did you know U.S. Marines stood in for the Army when some of the landings were made for the movie The Longest Day?); and even chapters on the making of Saving Private Ryan (which had its 20th anniversary last year). If you have any interest in this subject or know someone who does, I urge you to take a look at this unusual book.