On Earth Day I saw a clip on the Today Show about Chipper, a pooch with a passion for plastic—picking up plastic bottles, that is, ones humans have carelessly dropped along a trail in a national park or tossed into a river. The eight-year-old, medium-size, brindle dog with an ancestry that celebrates diversity, Chipper lives with Katie Pollak near Mesa, Arizona. In 2011 she adopted him from a shelter and immediately discovered his fascination with picking up and playing with plastic bottles. She encouraged him, and now the two (along with Quinci, a little 10-pound-dog Pollak adopted later) go on patrol, so to speak, picking up plastic bottles and other trash, often as part of a larger group. Chipper will retrieve floating plastic bottles from aboard Pollak’s paddleboard, and he’s expanded his repertoire to collecting other trash; one photo shows him swimming with an old shoe in his mouth. Some 28,000 people follow his adventures on Pollak’s Instagram page. You can read more about this trio on The Dodo. 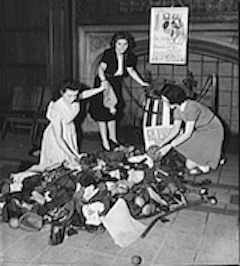 When I saw the story about Chipper it reminded me of the tail—uh, tale—of another dog that retrieved trash from a river. His name was Yappy. You’ve heard of Labrador retrievers and golden retrievers. You might say Yappy was a “rubber retriever.” His specialty was collecting rubber balls that could be recycled to aid America’s war effort in the Second World War.

In a July 4, 1942, story The New York Times described Yappy as “a tiny brown and white mongrel dog.” The accompanying photo shows a canine of questionable parentage about the size of a beagle, not something diminutive as, say, a Chihuahua.

He lived aboard a houseboat on the south side of the Harlem River near 196th Street with Mrs. Angela Temple, who purchased him for $5 five years before the newspaper story appeared. Whenever Temple saw something she wanted—usually a rubber ball—floating down the river, she’d alert Yappy, who would plunge in and bring it back to her. Temple would sort the balls by size and paint them in various hues, then string them as decorations for the houseboat or put them in a basket where they resembled brightly colored fruit.

This, by the way, was no tramp steamer; Mrs. Temple managed the eight-room houseboat, which was headquarters for a unit of the Volunteer Life Saving Services of New York, according to the Times. While she used refuse rescued from the river to decorate her floating abode, the furniture included a grand piano (presumably not fetched by Yappy), and “indirect lighting gave off a soft glow in the heavily carpeted rooms.”

Her hobby and Yappy’s game of collecting balls took on a new meaning after Temple read about First Lady Eleanor Roosevelt contributing a rubber ball to a scrap rubber drive. During the war scrap drives collected metal, rubber, paper, even kitchen drippings—anything that could be melted down and reused to make war materiel. Virgin rubber (Let’s just leave the condom jokes alone, shall we?) was scarce since the Japanese navy was between America and the primary sources. A nationwide rubber drive was held June 15–30, 1942, shortly before the Times story about Yappy appeared. Everything from old boots to hot water bottles was turned in at a penny a pound, according to a June 12, 2017, blog by Sarah Sundin, who has authored around a dozen historic novels set in World War II, including The Sea Before Us and The Sky Above Us.

In three years Yappy had plucked 500 balls from the Harlem River for his owner’s decorations. After verifying the paint she had applied wouldn’t hurt the rubber, Temple said she would turn in her collection for the war effort and “put Yappy to work on a double-time schedule to retrieve another 500 balls from the river.”